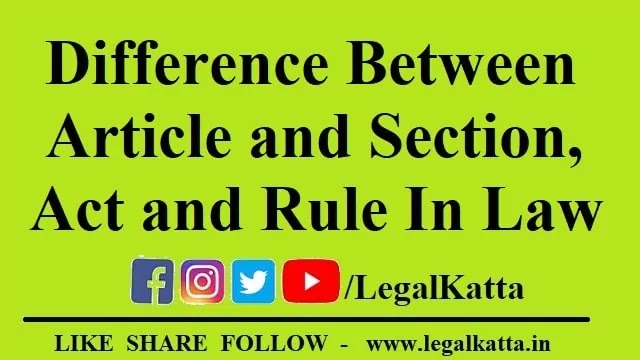 What is an Article?

When at the time of the drafting any Statute or Law of Land, if it is a fundamentally written document and it is universal then the legal provisions or set of rules of that statute or document were divided into articles. And, any other laws were divided into sections.

Example: The Constitution of India, the United Nations Charter, are universal laws. And, the legal provisions were divided into Articles in the document.

What is a Section?

The section is often seen in municipal laws. When any municipal law is codified then the certain portion or provision of the law is referred to as section and sub-section.

An Act is explained as when a bill has been passed through Lower House (Lok Sabha) and then Upper House (Rajya Sabha) and finally President of India gives his assent to enforce the bill. The bill becomes an Act or Law or Statute.

So, the laws which are made by the Parliament of India or any State Legislature in codified form, it is known as Act.

Example: The Right to Information Act, 2005 or Goods and Services Tax Act, 2017. These are the examples of Acts, Statutes or Laws.

In general, rules are the part of any legislation or statute that explains in detail the legal provision provided in the law. We can say the rule is secondary law which helps in governing the law.

The rules always collaborate with the law and there is no separate identity to the rules.

In simple words, the rule is a secondary part of any statute that helps in governing the law. And, the rules are always under the power of statute and does not beyond it.