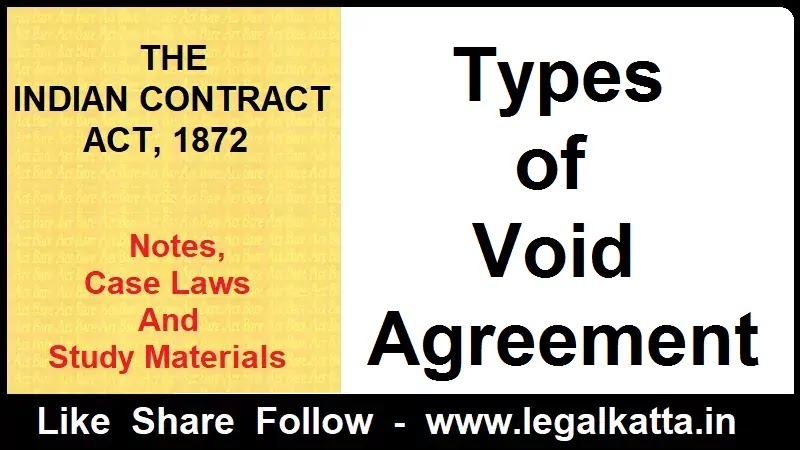 Types of void agreements are provided in contract law under sections 24 to 30 and section 56. In a social relationship, agreement and contract are the legal terms which are widely used. Here, the legally enforceable agreements are called Contracts.

Agreement Definition in Law of Contracts

In section 2 (e) of the Act,  the agreement is defined as “every promise and every set of promises, forming the consideration for each other”.

The agreement is a promise which forms the consideration for each other. Here, we have to define the promise and consideration. But, before that let’s understand what is the enforceability of law.

What is Void Agreement Meaning?

Void agreement means, Section 2(g) of the Indian Contract Act, 1872 has provided the void agreement definition as,” An agreement which is not enforceable by law is said to be Void Agreement.”

In the Law of Contracts, there are certain types of void agreement and these can be found under Sections 24 to 30 and section 56 of the Indian Contract Act, 1872.

For example, an agreement to purchase smuggled goods is void. These are void agreement examples.

So, let’s discuss the various types of void agreements;

1. Agreement in Which the Consideration and/or Object is Unlawful either in Whole or in Part (Sec. 24)

Example: A made an agreement with B for the exchange of drugs and medicine for Rs. 1000, here a void contract is formed because the consideration of an agreement is not legal in part, therefore the agreement is void.

In the above example, the object of an agreement is illegal. And, in this example, if we remove the drugs from the object then the agreement would be valid in the eye of law.

The meaning and definition of consideration are given under section 2 (d) of the Indian Contract Act, 1872 as “ When at the desire of the promisor, the promisee or any other person has done or abstained from doing, or does or abstains from doing something, such act or abstinence or promise is called a consideration for the promise.”

In the Indian Contract Act, 1872, section 25 stated that “An agreement without consideration is void unless it is in writing and registered, or is a promise to compensate for something, or is a promise to pay debt time-barred by the limitation law.”

So, all agreements without consideration are void but this section has some exceptions to this rule. These are;

The general rule is that the agreement is void without consideration. But, there are certain exceptions to this rule as per section 25 of the Indian Contract Act, 1872.

Example: X promises Y to pay Rs.10,00,000/- if B deliver A’s smuggled goods beyond the country. In this example the object of X’s promise is illegal, and the consideration for Y’s promise being in part is unlawful.

3. Agreement in Restraint of Marriage (Sec. 26)

According to section 26 of the Indian Contract Act, 1872, “Every agreement in restraint of the marriage of any individual, other than a minor is void.”

Example: A promises not to marry S if B pays him Rs. 50,000/-. This type of agreement is in restraint of marriage and this is a void agreement.

Section 27 of the Indian Contract Act, 1872 deals with the agreements in restraint of trade, in this section, it has been provided that “Every agreement by which anyone is restrained from exercising a lawful profession, trade or business of any kind, is to that extent void.”

However, Article 19 (1)(8) of the Constitution of India guaranteed the fundamental rights of freedom to practice any form of trade and business which is legal in the eye of law.

Example: If any person sells his business to any other person with his goodwill then the buyer has the right and can ask the seller to refrain from performing the same business in the same locality.

There are two exceptions to this rule.

This is principle will be referred to that when a person sells his business along with the goodwill of his business to the other person, then the buyer can impose certain restrictions on the seller like restraining the seller from practising the same business in the same locality.

Three provisions of the partnership act provided for the restriction of trade and business. These are as follows:

In the Court, it was held that this case did not come under section 27 of the Indian Contract Act, 1872, because the restraint to perform business was only partially as he was asked to stop his business in one locality but this section applied when there is a complete restraint of business, therefore the plaintiff is entitled to recover the amount of money and can practice his business in any other locality.

As per section 28, “Every agreement, by which any party thereto is restricted absolutely from enforcing his rights under or in respect of any contract, by the usual legal proceedings in the ordinary tribunals, or which limits the time within which he may thus enforce his rights, is void to the extent.”

In other words, it is the type of agreement that prevents or prohibited any person from enforcing his legal rights under a contract through the legal process of courts and arbitration etc. Therefore, such an agreement is expressly null and void.

Two exceptions can be found in section 28, these are;

If there is any terms and conditions in the agreement that presently arises questions and disputes shall be decided by the arbitration then such conditions are valid.

In this type of agreement, both parties agree to settle the disputes that arise in future should be solved by referring to the arbitration and any amount awarded shall be recovered from the contesting party.

Section 29 provides that “Agreements, the meaning of which is not certain, or capable of being made certain, are void.”

Example: A promised to sell his vehicle for a certain amount to B and B agrees for the same. Here, the contract cannot be formed because which type of vehicle he wants to sell does not mention in the agreement.

Section 30 of the Act, provided that, “Agreements by way of wager are void, and no suit shall be brought for recovering anything alleged to be won on any wager, or entrusted to any person to abide by the result of any game or other uncertain event on which any wager is made.”

But in this section, one exception has been provided that’s is the horse race. The section says that any wagering agreement relating to horse race shall not be considered voiding a contract.

The below-mentioned agreements are not considered as wagering agreements, these are;

As per Section 56 of the Act, it is provided that “An agreement to do an act impossible in itself is void.” Therefore, any agreement which has been entered to perform any impossible activity should be considered as a contract void.

This impossibility to perform an act is known as the Doctrine of Frustration.

Section 56 has two impossibilities, these are;

The first paragraph of section 56 of the Act lays down that “An agreement to do an act impossible in itself is void.”

The second paragraph of section 56 of the Act stated that “A contract to do an act which after the contract is made, becomes impossible, or, because of some event which the promisor could not prevent, unlawful, becomes void when the act becomes impossible or unlawful.

The main object of the Contract Act is to promote and maintain the contractual relationships between the parties but it is also important to prevent such contracts which if performed then the general public have to suffer from it. In this Act, the types of void agreements are provided under Sections 24 to 30 and section 56.