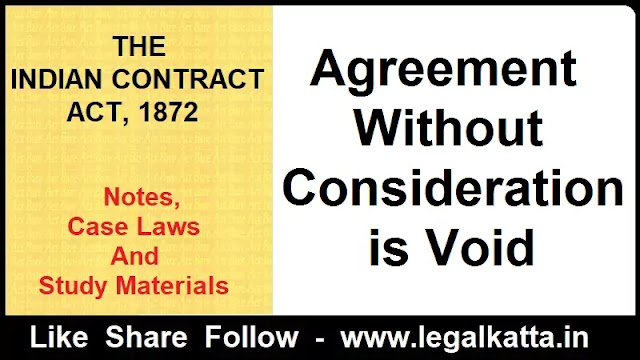 Before that let’s see the definition of Consideration in contract law.

What is consideration law? The meaning and definition of consideration have been provided under section 2 (d) of the Indian Contract Act, 1872 as “ When at the desire of the promisor, the promisee or any other person has done or abstained from doing, or does or abstains from doing something, such act or abstinence or promise is called a consideration for the promise.”

Agreement without Consideration is Void

So, all agreements without valid consideration are void but this section 25 provides some exceptions to this rule. These are;

The general rule is that the agreement is void without consideration. But, there are certain exceptions to this rule as per section 25 of the Indian Contract Act, 1872.

Example: A promises B to pay Rs.1,00,000/- if B deliver A’s smuggled goods out of the country. In this example the object of A’s promise is illegal, and the consideration for B’s promise being in part is unlawful.

According to section 24 of the Indian Contract Act, 1872, “If any part of a single consideration for one or more objects, or anyone or any part of any one of several considerations for a single object, is unlawful, and the agreement is void.”

No Consideration No Contract Exceptions

The exception of consideration that is Agreement without consideration is void has been provided under section 25 of the Indian Contract Act, 1872. As follows;

As per section 25 (1) of the Indian Contract Act, an agreement that is made between two individuals who are directly related to each other through blood or are near relations of each other, where the deal is in writing and has been registered formally and which can be enforceable in the court of law.

In other words, if an agreement is made in writing and registered between the two or more parties which are in close blood relation or spouse based on natural love and affection, such an agreement is enforceable in the court of law even when there is no consideration to other parties.

Example: A wants to give his car to B as a gift. B is a grandson to A. Due to love and affection, the agreement is valid in the eye of law even when there is no consideration in return.

In the Case of Vijay Ramraj v/s Vijay Anand, it was held that if the promisor promised to pay some amount of money to his relative during his life died, then the agreement is enforceable.

In the above case, the agreement is made out of the love and affection as a document of agreement registered also, so the heirs of the deceased person were made liable for the specific performance of a contract.

As section 25 (2) of the Contract Act, stated that “It is a promise to compensate, wholly or in part, a person who has already voluntarily done something for the promisor, or something which the promisor was legally compellable to do, or unless.”

Here, it is another exception to the principles of English Law which shows that past consideration has no value in the eye of law unless it’s a promise or an act done on promisor’s request.

If a person had done something in the past and the beneficiary promises to pay in future, then the contract is binding when it fulfils;

In other words, if a promise has been given to an individual who has been provided service voluntarily, then, in this case, all agreements are enforceable without consideration.

In the case of Hyderabad State Bank v/s Ranganath Roy, 1958, it was held that the word “Voluntarily Done” means the performance of something based on one’s own impulses, choices and will

As section 25 (3) of the Contract Act, stated that “It is a promise, made in writing and signed by the person to be charged therewith or by his agent generally or specifically authorised in that behalf, to pay wholly or in part a debt of which the creditor might have enforced payment but for the law for the limitation of suits.”

In other words, the time-barred debt was created when one individual borrowed money from another party and did not repay on time. As a certain amount of time has been passed, then it is no longer collectable.

This type of agreement without consideration falls under section 25 (3) and for invoking it, some essentials must be satisfied:

At the time of forming the agreement, both the parties should fix a date for repayment of debt which is after the period of limitation, in such cases, the Limitation Act does not acknowledge the debt under section 18 of the Limitation Act.

Whereas, the consideration to an agent is the remuneration but, no consideration is required at the time of appointment of an agent.

When a donor presented a gift to the donee is always based on natural love and affection. Therefore, the rule agreement without consideration is void is not applicable to the presentation of gifts.

Similarly, charity is also an exception to this rule. Any transfer in the way of gift or charity exchanged between donor and donee will be considered as valid agreement even there is no consideration.

In Vasant Rajaram Narvekar v/s Anushka Rajaram Narvekar, 1995, gift by mother to her minor son under gift deed with the right to property up to her lifetime. The son kept it with his father and did not repudiate on attaining the majority. Thus, accepted and irrevocable.

Section 148 of the Contract Act, defines bailment as the delivery of goods from one person to another for some purpose. This delivery is made upon a contract that post accomplishment of the purpose, the goods will either be returned or disposed of, according to the directions of the person delivering them. No consideration is required to effect a contract of bailment.