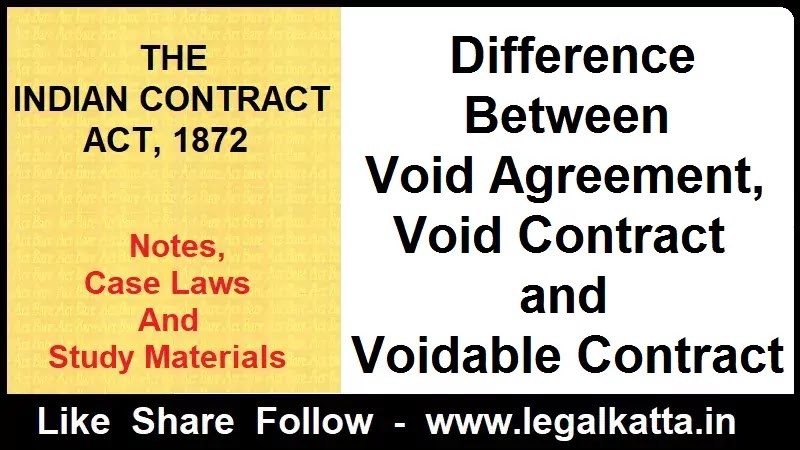 In this article, we gonna discuss the difference between void agreement, void contract and voidable contract.

Meaning and Definition of Void Agreement

The meaning and definition of a void agreement are provided under section 2 (g) of the Indian Contract Act, 1872 as ” An agreement not enforceable by law is void.”

The conditions laid down under section 10 of the Indian Contract Act, 1872, if not fulfilled then the agreement would be void. Sections 26 to 30 and section 56 of the Act are examples of void agreements.

Example: An agreement to sell smuggled goods is a void agreement.

Meaning and Definition of Void Contract

Example: A agrees to buy goods from B for a certain price in the next year. But meanwhile, B dies. There are no chances for the performance of a contract. Thus, the contract is not valid.

So, let’s see the difference between void contract and void agreement;

Meaning and Definition of Voidable Contract

Example: X wants to buy a property (A) that belongs to Y, But Y is not willing to sell his property. But X forcefully buys it from Y and paid a certain amount to Y. Then, it is on the Y either accept this forceful transaction and make a contract valid or he can take defence for the contract is not valid.

Difference Between Void and Voidable Contracts