The Meaning of Contract

An agreement between two or more parties that creates mutual legal obligations. A contract can be made in the form, either oral or written. However, oral contracts are more challenging to enforce and should be avoided, if possible.

Some contracts must be written to be valid, such as contracts that involve a significant amount of money (over Rs. 500). Contracts are part of everyday dealings in all aspects of life. Therefore, it is crucial to understand the rules governing them to ensure you have a valid contract.

These contracts define the rights and liabilities of parties to the contract. The law provisions relating to the contract are covered in the Indian Contract Act, 1872.

The Contract Act comes into force on the 1st of September 1872 and it extends to the whole of India except the State of Jammu and Kashmir.

Definitions under the Indian Contract Act

To learn the meaning of the contract we have to go through all the definitions which are related to the contract. By viewing the below picture we will understand the contract meaning and other related terms. 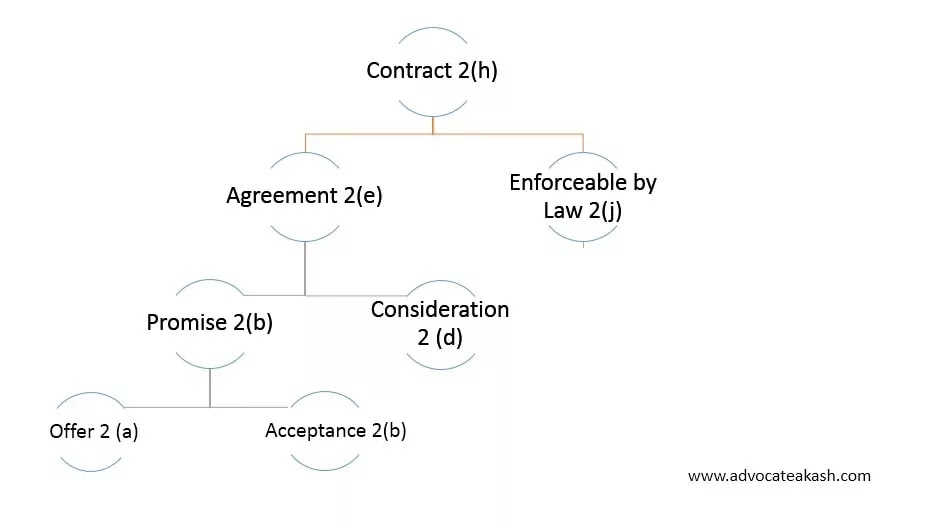 The meaning and definition of contracts are provided under section 2(h) of the contract act.

The definition of Contract is defined under section 2 (h) as “An agreement enforceable by law is a contract”. This is the meaning and definition of contract law.

In other words, we can say that a contract is anything that is an agreement and enforceable by the law of the land. This is the law definition of a contract.

In section 2 (e), the Act defines the term agreement as “every promise and every set of promises, forming the consideration for each other”.

The agreement is a promise which forms the consideration for each other. Here, we have to define the promise and consideration. But, before that let’s understand what is the enforceability of law.

This means any law which applies in India prohibits or ceases to perform the contract then becomes a void contract.

The Act in its section 2(b) defines the term “promise” here as: “when the person to whom the proposal is made signifies his assent thereto, the proposal becomes an accepted proposal. A proposal when accepted, becomes a promise”.

Here, by reading the above definition of the promise we can derive that the promise is made up of a proposal and acceptance of that proposal.

Before understanding the meaning of offer and acceptance, we will see the definition of consideration.

The parties enter into the contract with a view of getting consideration into it. This is laid down in the Latin maxim ‘quid pro quo‘, which means something in return.

The definition of an offer is provided under section 2 (a) as “When one person signifies to another his willingness to do or to abstain from doing anything, to obtain the assent of that other to such act or abstinence, he is said to make a proposal.”

Thus, we can summarize it as;

Essential  Elements of a Valid Contract

Agreement: The primary element of a contract that creates a contract between two or more parties in an agreement, which is a result of offer and acceptance, that forms consideration for the parties concerned.

The capacity of Parties: The capacity of parties to enter into the contract, i.e. he/she has reached the age of maturity and he/she must be of sound mind, and he/she is not disqualified from contracting as per the law like the alien enemy, foreign sovereigns, etc.

Lawful object: The object of a valid contract must be lawful.

Other important essential elements of the Contract