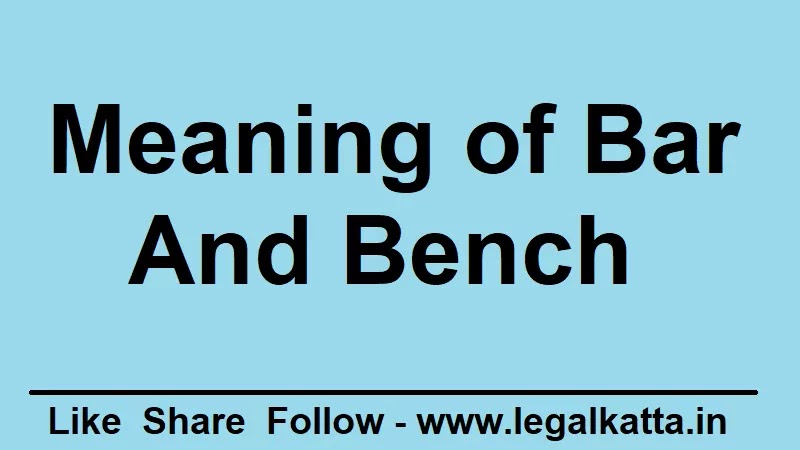 Meaning of Bar and Bench: An Introduction

The barandbench has several meanings in the context where it is used. In court, the bar is the common term used for attorneys who were licensed to practice in the courts. Whereas, the bench is a judge or panel of judges who sits in the courtroom.

So, the court has two parts where the cases are conducted, these are;

So, let’s understand the bar and bench meaning in brief;

The meaning of bar in law is an association or group of lawyers who are licensed with the State Bar Council to practice in the courts.

Originally, the term bar has been propagated in England and the term bar is used with intent to separate the lawyers and the court officers of the court.

The Black’s Law Dictionary also defines the term ‘Bar’ separate the front areas where the judge, court officers, lawyers, parties and witnesses would be able to conduct the business of the court.  And, from the back area, the space is available for the relatives of parties or observers of the case.

The Black’s Law Dictionary also provide another meaning of the term ‘Bar’ as the whole body of lawyers who have enrolled their names with the State Bar Council and are eligible to practice in the Court.

Further, The American Encyclopedia explains the bar is a courtroom where some area is reserved for the advocates who were practising in the courts.

In general words, the bar is the premises located in the court area where the lawyers sit.

The word ‘Bench’ has several meanings, first of all, the bench means a location in the courtroom where the judges take their seats.

The second meaning of ‘Bench’ is used to describe the members of the judiciary.

The bench is distinguished from the bar as consider all the members of the legal profession. So, the courtroom has two parts one for judges i.e. bench and another one for advocates i.e. bar.

Hence, the court has two parts bar and bench, and the phrase bench and bar denotes the judges and advocates collectively.