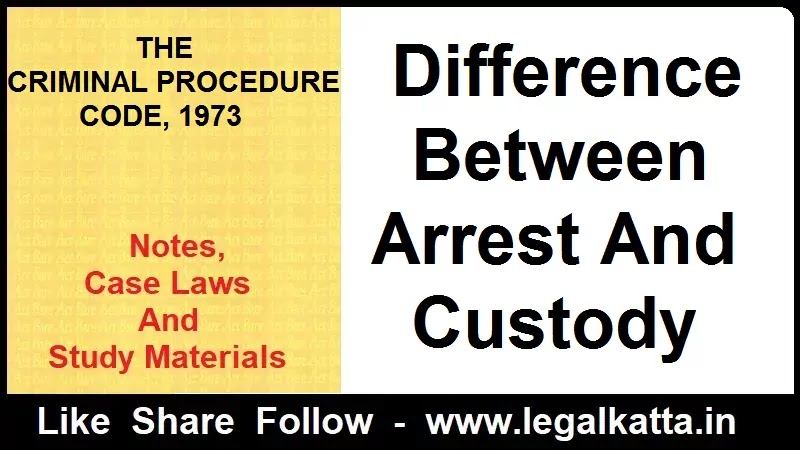 The terms Arrest and Custody are looks like synonyms but actually, they are not similar. In every arrest, there is custody but in every custody, there is no arrest.

According to the Legal Dictionary, the term Arrest means, “A seizer or forcible restraint of a person: an exercise of power to deprive the person of his or her personal liberty; the taking or keeping of the person in custody by the legal authority, especially in response to a criminal charge.”

There are two types of Arrest:

Arrest made in pursuance of a warrant which is issued by the Magistrate.

Arrest made without such a warrant but made in accordance with some legal provision for meeting such an arrest.

Generally, Custody means, the charge and control of an individual or property of another person. In Legal Dictionary, the meaning of custody has been provided as, “Mere restriction on the movement of an individual concerned is a custody.” In criminal law, the first stage is Arrest and the second stage is Custody.

There are two types of Custody;

Police custody can be defined as the immediate physical custody of an individual by the police officer who has committed a crime or who is suspicious. When the person is arrested and brought before the police station for further proceedings.

Judicial Custody is ascribed by a Magistrate or the Court itself. In this, the court may order the custody of a person depending upon the circumstances of the case.

Difference/Distinction Between Arrest and Custody